All the Cool Things about Us

Our Wild West re-enactment group has been in existence since 1979. We perform free shows for the public twice a month in Old Town Albuquerque. We are also available for hire and travel to other areas of New Mexico to share history, entetainment and family-friendly fun. If you have an event, we will provide the entertainment.

All of our shows include humorous jokes and characters that promise to bring laughter and smiles to you and your family. We may not always be historically correct, but we will be hysterically correct.

We are always on the lookout for more outlaws and bandits. If you think you have what it takes to be a Gunfighter, reach out to us. 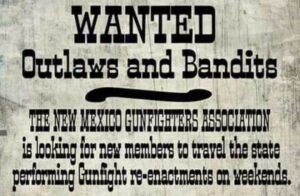 All of our shows are family-friendly so bring your youngens. We never use foul language and all of our actors are great with kids.

We teach the young cowpokes in all audiences of all shows the importance of gun safety. We perform live safety demonstrations before every show and ask the child(re) in the audience pertinent gun safety questions and those smart lil’ ones who correctly answer the questions are “deputized” with a free plastic sheriff’s badge that they keep as a memento of their time as a Junior Deputy.

Have your cell phones ready to create some lasting memories with the Gunfighters. In between and after shows, we will be available for free photo ops with props, such as money bags, cowboy hats and musical instruments 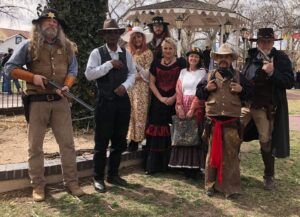 Our group of approximately ten to twelve actors consist of various characters such as Town Sheriff, Deputy, Outlaws, Bandits, Ranchers, Church Ladies, Saloon Girls, Madams, Ladies of the Night and other cowboy types. We have several shows lasting 15 to 25 minutes each, all with humorous family-friendly content. We supply our own costumes by either making them ourselves or purchasing them from Wild West outfitters.

Many of our performers have been in Westerns films and TV shows. Some of these productions include but are not limited to:

We have won awards and participated in and won competitions in the past. Some of our members are champions in SAS – Single Action Shooting.

We are available for hire. We have been hired by repeat clients for years, performing at annual Western-themed venues as well as shot-gun weddings, grand-openings and other fun-filled events.

We are New Mexican lawdogs. We don’t have to be honest all of the time.

We will happily die for your entertainment.

The New Mexico of Gunfighters Association (NMGA) was founded in 1979 and has been performing in Old Town Albuquerque since. We currently have six to ten members but we are always on the lookout for nore outlaws and bandits. Reach out to us if you are interested.